5 Steps to Discover Your Alter Ego

How can you get the mental edge to accomplish your biggest goals? Is there a secret to unleashing your confidence and breaking through whatever it is that keeps you from achieving greatness? For Todd Herman, the key to unlocking his heroic self and adapting to any environment was discovering his Alter Ego. 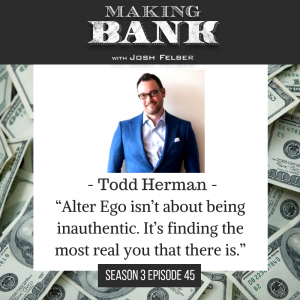 “This isn’t about being inauthentic. It’s about finding the most real you that there is — peeling back the layers that shouldn’t be there and allowing yourself to step through.” Todd needed to access a gentle self, something he put away for a long time because it didn’t serve him in his work life, but that he needed desperately at home. So he found inspiration for his Alter Ego at home in Mister Rogers, a person with seemingly unlimited understanding, patience, and love.

Maybe you battle insecurity, imposter syndrome, self-doubt, or negativity. Finding your Alter Ego within could change the game for whatever aspect of your life you want to improve whether that be personal or work. So ask yourself, “who do I most want to become to help me be successful in that field of play?”

Todd has identified 5 steps to help you discover your Alter Ego, so you can perform at the highest level and live in the context of the moment by using your creative imagination to defeat resistance in your life. 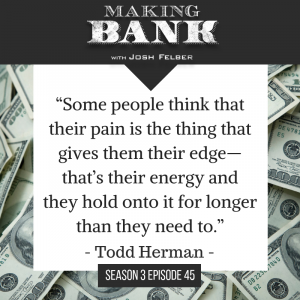 Ask yourself, “What is the area that I am the most frustrated with right now?” The more specific you are, the easier it will be to develop a targeted Alter Ego to address that area.

What are you most frustrated within that context? Where are you not showing up? Is there something you need that you consistently can’t access? Find what you are most concerned about, the thing that time after time fails you.

Turn Step 2 on its head. How do you most want to be showing up? Think of someone you admire or an animal that possesses the qualities you could adopt to show up in that way.

Remember Todd’s example of Kobe Bryant. Kobe is known as the Black Mamba. He could arguably go head to head with any biologist on the subject because he has studied them so much. The qualities the mamba possesses are what Kobe uses consistently hit peak performance on the court.

Find your Black Mamba and learn everything you can about them, so you know how to react in any given circumstance as that inspirational character.

Name the superpowers you specifically need and find an artifact or totem that you can use to embody the meaning of those qualities. This is your Alter Ego power switch. The item you turn to when you need to access that ego.

Todd told us about his private equity client who uses a photo of his grandmother as his totem. He is a billionaire, hard-charging person, and needs his Alter Ego to help him step into a state of being a better quality leader. His intensity has a tendency to burn people out, so shifting into his Alter Ego balances the hard edge that can ride people too hard.

It could be something you wear, a bracelet or glasses. It could be a picture in your wallet. Whatever it is, it needs to represent all the qualities of the person you want to be.

This is the final phase. It’s the intentional moment when you honor the inspirational person, or the spirit of that animal by creating a powerful emotional connection. You build an emotional bridge between thought and action.

A lot of people know who they want to be, and know what they need to do, but they don’t take action because they’re paralyzed by an emotional block — the drawbridge of emotion is up. If there is some sort of resistance, you need to use the connection between this inspirational person or animal to activate the person that you want to be.

It’s important to remember that these steps are by no means meant to take the place of therapy or to be used as a quick fix for your past. Todd believes in therapy, the power of meditation, and acknowledging the tough things that made you the way are. 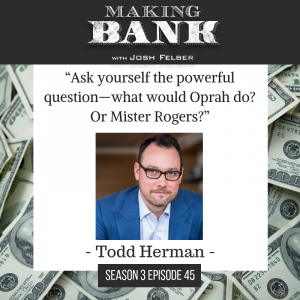 These 5 steps are meant to be used as a tool, a mechanism for accessing the parts of yourself that live in you but aren’t always your first responders, the deeper forces in you that can help you crush resistance. Don’t get locked in the image you have created of yourself, instead expand your vision of who you could be.

To get Todd’s book and learn more about creating your Alter Ego head to www.alteregoeffect.com