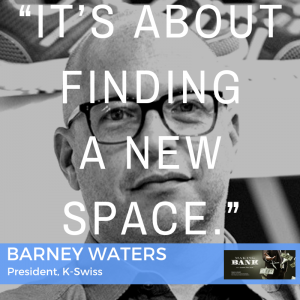 Barney Waters has been the president of K-Swiss for 3 years. In that time he’s taken the brand from near extinction to success by making entrepreneurs the “Jordan” of their brand. In this week’s episode, he offered some poignant insight on what it takes to stay relevant and how you can find success when competing with giants. What do you do when competition is stiff and you just don’t have the capital to compete?

Find Your Lane! “It’s easy to be different. It’s harder to be different and have something that is growing and relevant to the consumer — that has commercial potential.” In other words, don’t create a product or marketing campaign that stands out for all the wrong reasons. Think about your consumer. Who is your ideal target, and what is missing from other brands, that you could offer to get the edge?

For K-Swiss, they needed a spokesperson — someone to revitalize the company’s image. Nike, Adidas and Under Armour had essentially covered the athlete angle, and K-Swiss didn’t have the cash to compete in that arena, nor would finding an athlete set them apart as a brand. It had been done over and over.

At the time, partnering with Gary V and aligning with young entrepreneurs seemed a bit out of left field only because it had never been done before. If selecting a spokesperson is all about giving a voice and a face to your ideal client, then hungry, successful, determined entrepreneurs were precisely the right fit for K-Swiss — Same spokesperson model, different angle. 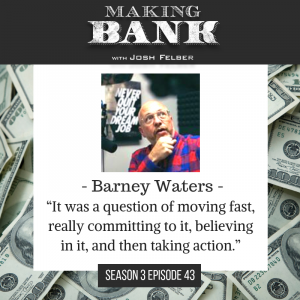 If you found a new lane, it means you are probably to the first one there. This is where being a smaller brand is your friend. You don’t have to go through level after level of approval, because there simply aren’t as many gatekeepers. Without the hierarchical red tape, you can maneuver quickly and gain the edge. Once you find your lane, get into it fast!

One of the biggest challenges Barney faced was getting a team to go all in on the idea and really commit. It’s hard. You’re cutting a new path by the very nature of what you’re trying to accomplish. If you can assemble a team that believes in the idea, believes in you, and is willing to commit, you’re life will get ten times easier. 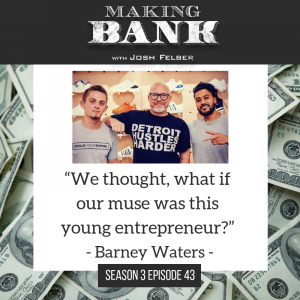 One of the reasons K-Swiss needed to hire someone like Barney, is somewhere along the way they lost their course. You have to be looking to the future, predicting trends, outpacing your competitors and the only way to do that is to ingest as much information as you can. We are living in the information age, with podcasts, streaming services, Google, YouTube, and social media there is virtually nothing you can’t learn. “There is no excuse for any idea being un-executable with the power of Google.”

If you have an idea research it and execute it. Nothing is stopping you!

Check out the Gary V partnership on KSwiss.com and to hear more from Barney Waters check out his podcast CEO’s Wear Sneakers. 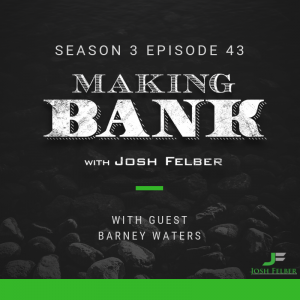 The Future of Advertising and AI