Home / Blog / We Must Raise our Kids to be Entrepreneurs

We Must Raise our Kids to be Entrepreneurs 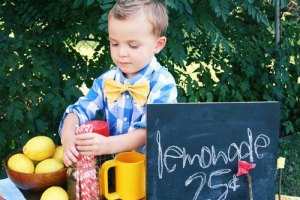 Kids have the tendency to think ingeniously at any time. They might wonder why we can’t have a black and white mirror while having pizza, or build a remote control buffalo while drawing scenery with crayon. With such creative ideas, it’s no wonder that recent generations are coming up with new ideas for the public so frequently. We need to start raising our kids to be entrepreneurs.

Before the world of computers, internet and young millionaires, people were simple and only pushed their children towards sensible careers which would give them a comfortable life, but as time went on, people began to change. Gone were the days of studying dutifully until you reached college where you would study in an appropriate field and then get a job, or work in the family business. Young entrepreneurs are cropping up in every country and working their way to becoming millionaires.

Fact is that we didn’t know it, but we were being trained to become businesspeople since we ourselves were children. For some, it was manning a lemonade stand during the long hot days of summer vacation, or selling merchandise by telemarketing. But the crux of the matter is that we didn’t even know that we were being trained to think like entrepreneurs, and now it is our turn to take an active role in our children’s future by broadening their horizons and encouraging them to think for themselves.

“Growing up in a family of doctors, I wanted to be a brain surgeon for a while. But ultimately, I get most excited about creating things, which is why I decided to become an entrepreneur.”

Quoted by Alexa von Tobel who is the founder and CEO of LearnVest.com, an award-winning personal finance website, the thing that most encouraged her to be an entrepreneur was creativity and the hands-on approach. By encouraging a child to dive into their own creativity, we can help them come up with ideas which can astound the world. Many people now unburden themselves from their children by plunking them in front of the TV. By doing so, not only are we stilting their mental growth but we are also wasting their time which could be spent doing something innovating.

We, at times, dismiss our children’s words by thinking them to be nonsensical but as time suggests, children themselves can be smarter than grown-ups, and if a child is smart enough to start a business, even a small one, it is up to us to give them the encouragement they need to make it big in the world.

Take a simple example. A child wants you to buy them a book; they negotiate a deal with you for the price of the book in exchange for house chores. The deal is good and they actually work on their promise. Their good negotiation skills already prove that they could be well on their way to becoming young entrepreneurs. Children need confidence and leadership skills to prove their worth, and with the business world eating out professionals, a child might be just the person to throw a spanner in the works. Children as young as 6 years old are successful entrepreneurs nowadays; which goes to show that you don’t need to be a well-learned grown-up to be successful. Don’t worry about them pigeon-holing themselves either. Each child wants to feel like they belong somewhere, and it is only when they’ve grown up a little that they start to become their own person.

And if your child is a daredevil, but a wise one, they are already smarter than most of the entrepreneurs out there. Allow them to take risks because the risks they take now won’t be as disastrous as the ones they might take in the future. Encourage them to be curious, and answer their questions intelligently, and not just to get rid of them.

The world is full of good role models for your children to base their own dreams upon.  For many people, computer moguls like Steve Jobs and Bill Gates are the reason why they started working on their dreams, and according to many psychologists, it is our own thinking that they will not make good decisions and choose good role models for our future.

Even at home, by believing in their abilities and thoughts, we can be our own children’s role models. One does not need to be world-famous to affect someone enough to inspire them, and for many entrepreneurs, their own parent’s hard work was enough to inspire them to keep working on their own goals, and if we ourselves believe that our children can do what they strive to do, their self-confidence will automatically increase.

Ability to accept failure or change

Examples of bad attitude are many. In schools, children are forced to compete with other children to be the best that their parents believe them to be. However, what parents don’t realize is that a child is already doing the best they can. Study shows that stress levels in schools now are the same as that of mental asylum patients in the 1940s. We strive for our children to be better than other children, to be successful in their career and to make a lot of money, to make them proud, but our children cannot be all that if we do not give them room to breathe or let their horizons grow.

We must learn to accept our child’s limits and encourage them to yearn for more in their own way. A child who is good at math might also be good in music, and might even have plans to invent a new instrument one day, but that child cannot concentrate on their own idea if their parents are pushing them for scholarships in math and urging them to let go of their musical talent and dismissing it as a pass time. Instead of telling them how to live their life, we should ask them how they see their future, and what they want to be.

We must also teach them to acknowledge their failures. Not everyone can become successful in one day. Even a genius like Albert Einstein was told that he was too stupid and would never account to anything, and while he was not an entrepreneur, he is the best example of how one should take their failure and learn from it and show others that they will not go without a fight. If we teach our children the value of patience, they themselves will use their own wisdom to work their way around the cause of failure.

If you want to check out a book and program by my friends Adam & Matthew Toren stop by Kidpreneurs.org. Fuel a child’s desire to get involved in business early by stoking curiosity in simple, engaging, creative, and safe ways.
Stopped by nothing and often inspired, the Torens set out to author their own book and program to teach children the same principles they had been teaching adults for years.

The philosophy behind the book is simple. The future of our children begins with us! Most people say, “It’s never too late.” The Torens say, “It’s never too early.” The benefits for an early introduction to the basic principles and infinite rewards of entrepreneurship are massive. The Torens have managed to break down otherwise difficult concepts in to fun to read bites that any bright minded child can easily enjoy.

All children share the inalienable right to become financially independent, whether rich or poor, city or suburb. Sharpening a child’s entrepreneurial skills will equip them with the skills necessary to tackle a limitless future. There is no reason it cannot start at an earlier age. Kidpreneurs puts the power in the hands of the future.

Entrepreneurs know the risks they take when they start a new business, but if they have back-up and support to help them move forward, than they will have enough confidence to be successful and to believe in their own product or service. Similarly, if children nowadays are encouraged to start their own business, with their new ideas, they can make a splash in the business world and impress investors and the public to make them successful for a long time.